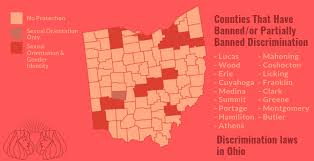 Such laws can provide the protection and rights for LGBTQ+ people that other people already have. Laws can protect same sex parents looking to adopt, protect children in the foster care system, bullying in schools, and covering LGBTQ+ people in hate crimes. These laws are beneficial because they will provide LGBTQ+ people with the same rights as everyone else.

If the state of Ohio can’t propose and pass a state-wide LGBTQ+ anti-discrimination law, it is up to the counties and cities to protect their communities. The lack of anti-discrimination laws leaves over 4.3% of the population without lawful protection. Especially in local cities and counties, the community has a strong voice and power over local government decisions. Community members should use their power for the good and protect the basic rights of everyone.