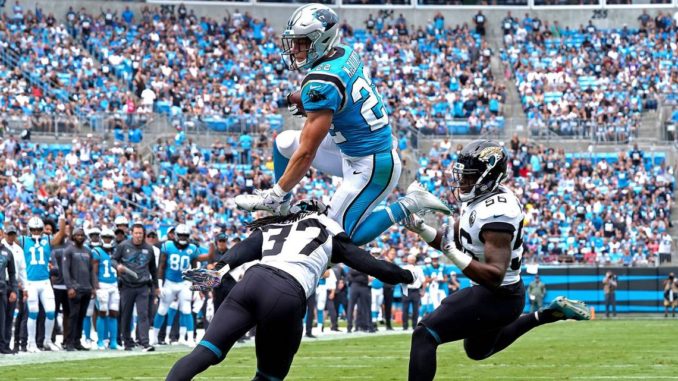 Panthers RB Christian McCaffrey leaps over defenders for a Touchdown. Many consider him to be a front runner for the MVP Award.

Okay so the AFC North is currently the worst division in football right? This will be the division where a team will win it at 8-8 and make it to the playoffs. It’s really disappointing considering the hype surrounding the teams. We learned a couple of things from week five: the Packers are legit, the Ravens need help, and the Saints can still win without Brees. I got back on the right track with my predictions last week and hope to build momentum into this week. That said, here are my week six predictions:
Record:
Last Week: 9-6
Total: 45-33
Teams on Bye: Bears, Bills, Colts, Raiders

Thursday Night Game:
Giants vs Patriots:
Daniel Jones has given Giants fans something they haven’t had in a while, hope. But this hope will be dashed on the turf of Gillette Stadium on Thursday Night by the New England Patriots. The Patriots look unstoppable and remain the only undefeated team in the AFC, and will extend that to 6-0 this week. The Patriots defense will find a way to silence every part of the Giants offense, and the Giants defense will have no way to stop Tom Brady and the Patriots offense. We’re back to having unenjoyable Thursday night games, just a heads up.
Patriots Win 31-10

Sunday London Game:
Panthers vs Buccaneers:
Bright and early on Sunday morning we’ll get some football action coming at us The from across the pond. At the time these two teams played, the Buccaneers pulled a surprising upset. But the Panthers have gotten better since then, and somehow it’s attributed to them losing Cam Newton, their starting QB. While backup QB Kyle Allen is nothing special, he does enough to keep the ball moving and not make mistakes. The real reason the Panthers have been winning games is because of two big reasons: RB Christian McCaffrey and their defense. The Buccaneers were able to stop McCaffrey last time, but it will be different this time. The Panthers offense is operating a lot better than when Cam Newton is at the helm, and they seem to have realized handing it off to McCaffrey might be their best option. I think the Panthers will get revenge for the last game and beat the Buccaneers in London.
Panthers Win 24-20

Sunday 1:00 Games:
Redskins vs Dolphins:
Here it is, the first Tank Bowl of 2019. Both of these teams are winless. Both are obviously gunning for a better draft pick. But which team will ruin their own plans by winning? I think I like the Dolphins in this game. Granted, both of these teams are terrible and I don’t feel comfortable picking either but the Dolphins have shown just a tad more talent than the Redskins. Plus, the Redskins just fired their head coach so they have no clue what to do now. Both of these teams’ defenses are bad enough to allow this to be a high scoring game, but both offenses are terrible enough to not score any points. There is really no way to tell what happens in this game and I for sure won’t be watching it.
Dolphins Win 21-17

Saints vs Jaguars:
This is an interesting game. The Jaguars have actually been doing pretty well under backup QB Gardner Minshew, and the Saints have been doing very well under backup QB Teddy Bridgewater. This game is the battle of the backups. It comes down to which backup has a better team surrounding him and I think that’s Bridgewater and the Saints. But, this game will be very close, and the Jaguars will put up a very good fight. I think the Saints will win it on a last second field goal, and Jaguars fans will still be able to hold their heads high knowing they almost beat the Saints.
Saints Win 33-30

Bengals vs Ravens:
While the Ravens are beginning to trend down in their performances, the Bengals started badly and have subsequently gotten worse. The Ravens will win this game easily even with QB Lamar Jackson starting to regress as a passer. The Bengals have no defense, a below average offense, and a rookie head coach, nothing it looking good for them. If they trade A.J. Green, they will continue to get worse.
Ravens Win 24-10

Seahawks vs Browns:
The Browns have been a huge disappointment so far this year. So much hype was built around them in the offseason and they have not delivered. On the other hand, the Seahawks have looked really good and QB Russell Wilson is sparking some serious MVP discussion. The Seahawks should win this game pretty handily and until the Browns and especially Baker Mayfield show any sort of winning potential, I won’t be predicting a win for them.
Seahawks Win 35-17

Eagles vs Vikings:
Both of these teams are hot and cold. The Eagles don’t have a great defense, the Vikings don’t have a great passing offense, because they have Kirk Cousins as their QB. But Vikings RB Dalvin Cook should do enough on the ground to burn the Eagles defense and get the Vikings the win. Eagles QB Carson Wentz should put up solid stats, but it won’t be enough against the Vikings top ten defense. The Eagles could still turn the season around and win the division, but it’s tough to predict a win for them this week.
Vikings Win 27-21

Texans vs Chiefs:
Both of these teams have incredibly explosive offenses, but uninspiring defenses. This has the look of being a classic shootout game. Surprisingly, this is the first time Texans QB DeShaun Watson and Chiefs QB Patrick Mahomes will face off. I think it will be a really entertaining game, and I recommend everyone watches it if they can. As far as the prediction goes the outcome of this game heavily lies on whether or not Chiefs WR Tyreek Hill is back. I’m going to assume he is, but I still think I would predict a Chiefs without him, but I’d be less confident in it. But I think Mahomes and the Chiefs offense will do enough to get the win at Arrowhead.
Chiefs Win 42-38

Sunday 4:00 Games:
Falcons vs Cardinals:
I had really high expectations for the Falcons coming into the season. I thought they had legitimate Wild Card chances. But, they disappoint week after week. They have amazing offensive talent, but can’t figure out a way to utilize it. It also doesn’t help that their defense can’t stop anything. All that aside, they are still a better team than the Cardinals. The Cardinals will get better and win games, it just won’t be this year. Their team is still going through some growing pains, and will not be able to win against teams with experienced QBs like Matt Ryan. So, the Falcons will get the win this week and move to 2-4.
Falcons Win 30-24

49ers vs Rams:
This is the game where the 49ers will show their true colors. They are facing a real opponent in the Rams, and it will be interesting to see how they perform. I think the Rams will win. They’re at home and in my mind they’re the better team. The 49ers are actually doing pretty well so far, but they will be slowed this week. Their defense is actually pretty inspiring, and have proven a lot of doubters wrong. The race between the 49ers, Rams and Seahawks for first place in the division will be one to watch all year long, but the Rams get the advantage over the 49ers this week.
Rams Win 21-20

Titans vs Broncos:
This game is between two teams with no shot at the playoffs. The Broncos will be lucky to get a winning record, and the Titans are too inconsistent to predict most weeks. I think the Titans continue their losing streak this week and will have trouble putting up points at “Mile High Mania”. The Broncos will get their second win of the season, although I don’t know how many more there are to come.
Broncos Win 17-13

Cowboys vs Jets:
The Cowboys have not looked great against teams with a winning record. Luckily for the Cowboys, the Jets don’t have a win on the season. The Jets do get QB Sam Darnold back this week, but it won’t matter much as the Cowboys will trounce them on both sides of the ball. There’s not much else to say except for good luck Jets.
Cowboys Win 35-21

Sunday Night Game:
Steelers vs Chargers:
The Steelers are down to their third string QB. The Chargers just lost to the Broncos. Neither of these teams look inspiring. But the Chargers will still come away with a win because they at least have their first string QB still starting. I really don’t like either of these teams playoff chances, but the Chargers at least still have a flicker of hope. I really don’t recommend watching this one.
Chargers Win 20-14

Monday Night Game:
Lions vs Packers:
The Lions have actually done surprisingly well this season. Matthew Stafford looks like a completely new QB, Kerryon Johnson is a top-15 RB, and their defense is strong. But, it’s Aaron Rodgers and the Packers in a primetime game. At home. Rodgers frequently outperforms Stafford in their meetings and I just don’t see the Packers taking an L at home. Lions fans should get ready though, because I’m about to send a lot of wins their way in the coming weeks, it’s just not this week.
Packers Win 33-30

Those are my week six predictions! Did I get anything wrong? Is your team going to win? Let me know in the comments below. And remember to enjoy some football this weekend.