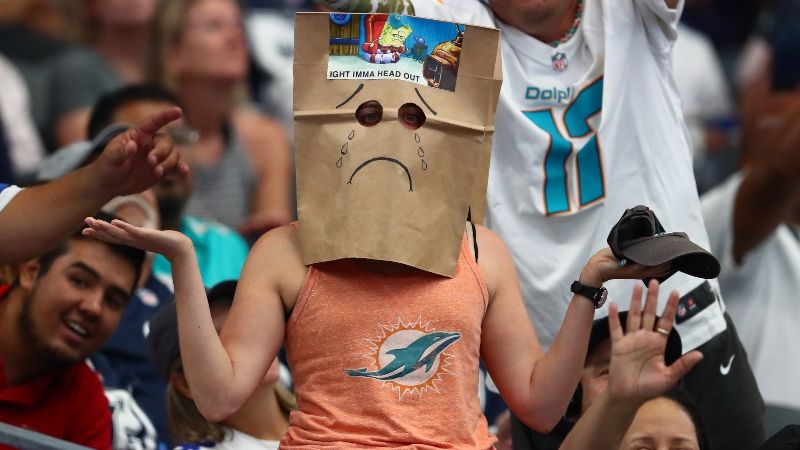 A Dolphins fan after another blowout loss. The Dolphins seem to be tanking in order to get a higher pick in next years draft.

Another NFL week has come and gone and it was another rough week for my predictions. How was I supposed to know Kyle Allen would actually perform better than Cam Newton has all season? But I digress, I made some bad choices by picking teams who haven’t proven themselves, yet I thought would still win. The Eagles are not as good as I originally thought, the Bills are a wild card contender, and the Lions are technically undefeated. It’s been a crazy season and we’re only at week four. That being said, here are my predictions:

Thursday Night Game:
Eagles vs Packers:
The Packers are 3-0. The offense is still working out some kinks but the defense is legit, and Aaron Rodgers, even though he’s off to a slow start, he is still a top five QB. The Eagles have struggled with losses to the Falcons and Lions in back to back weeks. Some of that could be contributed to almost every receiver on the team getting injured, or it could just be that the Eagles aren’t back to their Super Bowl form. Either way, I’m going to give this game to the Packers because they have a better defense and better QB play.

Sunday 1:00 Games:
Redskins vs Giants:
Both of these teams are not good. That’s just where they stand after three weeks, but if the Giants are able to pull off this win, they might be able to prove that they won’t finish last in the division and that Daniel Jones is the QB of the future. The only question mark surrounding the Giants is: how will they do without star RB Saquon Barkley? Barkley went down with a high ankle sprain last week and is now out for 4-8 weeks. However, Giants rookie QB Daniel Jones did step up and lead the Giants to a comeback victory. The Redskins looked pitiful against the Bears with Case Keenum turning the ball over five times over the course of the game. Some of that could be contributed to the Bears’ defense, but I think the Redskins offense needs to improve as a whole. I’m going to give this game to the Giants because I believe Daniel Jones has the talent to lead them to a win for the second week in a row.
Giants Win 35-27

Chiefs vs Lions:
Okay, maybe I underestimated the Lions. They are a much better team than I originally thought, and I will start predicting more wins for them, but it won’t be this week, the Chiefs are just too good of a team to pick against. QB Patrick Mahomes is on his way to another monster season and it makes no sense to pick against him. Even though the Lions defense is surprisingly strong, there is no defense Patrick Mahomes can’t torch. I think the Lions will win more games in the future, but they will get knocked off the undefeated list this week.
Chiefs Win 27-21

Titans vs Falcons:
Both of these teams looked strong in a week out of the season.. The Titans in week one and the Falcons in week two. But the other two weeks they’ve looked pretty awful. I honestly don’t know who to give this game to. I had really high hopes for the Falcons at the beginning of the year, but now I just don’t know. I’m still going to give this game to the Falcons because they’re the overall better team, but this game is not one to turn on unless you have some fantasy stock in it.
Falcons Win 22-14

Browns vs Ravens:
The Ravens are looking like the best team in the AFC North, and it will show in this game. Lamar Jackson will outplay Baker Mayfield by miles. It’s really unfortunate that the Browns aren’t better given the talent they have on their team. The Browns defense is better than the Ravens’, but it won’t be enough to slow the dual-threat QB that is Lamar Jackson, and the Ravens will take this game easily.
Ravens Win 23-14

Raiders vs Colts:
Over the past three weeks the Colts have proved that they still could be a playoff contender without QB Andrew Luck. The Raiders have proved they are still the Raiders. Colts QB Jacoby Brissett has proven that he can step up in place of Andrew Luck and still win the Colts games. The Raiders have shown flashes of talent this year, especially on the offensive side of the ball, but they just can’t win contested games. So, I’m going to give this game to the Colts, and I think they’ll win it pretty easily.
Colts Win 28-14

Patriots vs Bills:
Both of these teams are 3-0. People tend to use the “Bills have only beaten bad teams card”, but tend to forget that the Patriots played the Dolphins and Jets. I think this game will be surprisingly competitive. Both defenses are equally strong, but the Patriots offense is better than the Bills offense, and so that gives them the slight edge. This will be a really good game and I recommend turning it on if you’re able to. This is the game where we will see what both teams are made of.
Patriots Win 21-13

Panthers vs Texans:
Okay so is Kyle Allen actually better than Cam Newton or was it the fact that he was playing the Cardinals defense? Hard to tell, but I think we’ll figure it out this week. The Panthers are actually are very well rounded team, I just don’t think it’s truly shown on the field yet. Worse comes to worst, RB Christian McCaffery has to carry the whole team on his back. But, I think the Texans have a better QB, receiving corps, and defense, so they will win this game. I think a lot will be revealed about the Panthers this week and they will show their true colors. Whether the colors are ugly or not is to be determined.
Texans Win 31-23

Chargers vs Dolphins:
The Chargers are not looking too great. Many consider them a wild card guarantee at the beginning of the season, but now everyone is left scratching their heads. While there is great debate about the Chargers full season outlook, they will definitely win this week. The Dolphins are by far the worst team in the NFL, to the point where any college team ranked in the top five could beat them. So the Chargers will for sure get it done this week. We’ll see how they look once RB Melvin Gordon returns.
Chargers Win 45-14

Buccaneers vs Rams:
Wow. This won’t even be close. The Rams are going to wipe the floor with the Buccaneers. This will be a rough game for a Buccaneers fan, and a boring game for the casual NFL viewer. The Rams have the Buccaneers beat on both sides of the football. Good luck Tampa Bay, you’re going to need it.
Rams Win 33-13

Seahawks vs Cardinals:
The Cardinals haven’t actually been too bad this year, but they just can’t win a game. They always play very well until the last five minutes of the fourth quarter, and then just fall apart. They will play the Seahawks the same way. I could see a big day for both offenses in the making. The weaknesses of both defenses is making this game begin to look like a good old fashioned shootout. But the Seahawks will win off a last second mistake by the Cardinals.
Seahawks Win 35-28

Vikings vs Bears:
The Vikings had a lot of trouble with the Bears last year. But, I also don’t think the Bears are as good as last year. I think the Vikings run-first offense will struggle mightily against the Bears and Cousins will be forced to throw, which will be the Vikings downfall. The Bears will win this one, but the Vikings could possibly win the teams’ next meeting in Minnesota.
Bears Win 20-10

Jaguars vs Broncos:
Jaguars QB Gardner Minshew might be the real deal until Nick Foles get back. He certainly has a great chance at winning this week against a weak Broncos team.  Joe Flacco has been playing like he’s asleep for the whole season and the Jaguars top tier defense will take advantage of that, which will allow for the Jaguars offense to put up enough points to win.
Jaguars Win 17-13

Sunday Night Game:
Cowboys vs Saints:
This game is really hard to predict because I really don’t know how either of these teams will perform. The Cowboys have looked pretty solid through the first three weeks but this is their first test. The Saints definitely took a step back without Brees, but still managed to win, so I really don’t know. I’m going to cautiously give this game to the Cowboys because they currently have more promise in their offense.
Cowboys Win 33-28

Monday Night Game:
Bengals vs Steelers:
If there is ever a time for the Bengals to beat the Steelers its right here. Steelers QB Roethlisberger is out, Antonio Brown is gone and their offense has not looked great. On the other hand, the Bengals have also not looked great. I think if AJ Green was back for this week I’d give it to the Bengals easily, but it’s in Pittsburgh and the Bengals usually stink in primetime. But, given that the Bengals at least still have their starting QB I’ll give it to them. I’m not confident in the pick, but that’s what I’m going with.
Bengals Win 21-18

Well there they are, my week four predictions. Did I get anything wrong? Voice your opinion down in the comments! Don’t forget to enjoy some football this weekend.