In The Know: Government Shutdown 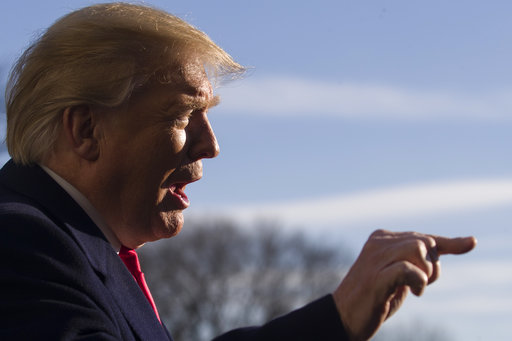 President Donald Trump speaks on the South Lawn of the White House as he walks from Marine One, Sunday, Jan. 6, 2019, in Washington. Trump is returning from a trip to Camp David. (AP Photo/Alex Brandon)

The government shutdown that began midnight EST on Dec. 22, 2018 has come to a temporary end this past Friday, Jan. 25. This was the longest shutdown in American history, stretching 35 tense days of stalemate between the President and Congress. The government is set to shut down again on Feb. 15 if the President’s requests are not met.

The main reason for the shutdown was President Trump’s policy on immigration. Trump is a strong advocate for a southern border wall separating the U.S. from Mexico. He claims that the wall will “pay for itself in two months,” and that the country loses $250 billion annually on illegal immigration. However, people are growing tired of the President’s refusal to reopen the government for good and compromise on border security.

Four days before the shutdown, Trump tweeted, “We need the Wall for the safety and security of our country. We need the Wall to help stop the massive inflow of drugs from Mexico…if there is no Wall, there is no Deal!” Over a month later, just 24 hours after tweeting “We will not Cave!”, President Trump agreed to sign a bill to temporarily open the government, without providing any funding for a wall.

Looking back, what exactly did the government shutdown mean for the people? Without adequate funding, non-essential federal officers that receive funding from Congress were forced to close. Unfortunately, some employees were required to remain working without pay. National Parks and FDA inspections are just two examples of services that were not in operation. Even one of the branches of the U.S. military, the Coast Guard, was not receiving any pay for their services.

“About 380,000 [federal workers] have been furloughed without pay while the rest are still working without pay,” according to the Washington Post. “Some federal workers and contractors affected by the shutdown have turned to crowdfunding sites, like GoFundMe, to raise funds for rent and bills.” According to the Congressional Budget Office, $3 billion of GDP lost from the shutdown is permanently gone and can’t be recovered in the future.

The shutdown was intended by Trump to convince Democrats to approve funding for a wall. But did it accomplish its goal? Following President Trump’s national address on Jan. 8, which was accused of being “false” and “misleading” by The New York Times, Democrats Speaker Nancy Pelosi and Senator Chuck Schumer delivered a response.

According to the Washington Post-ABC News Poll, 53 percent blame Trump and the Republicans for the shutdown, and 29 percent accuse Democrats in Congress. Thirteen percent claim both sides are at fault for the shutdown.

Before temporarily reopening the government, President Trump and Congress had been looking to negotiate a compromise to end the shutdown. Trump’s previous proposal, the Bridge Act, was introduced Saturday, Jan. 19. This act would have temporarily protected Dreamers, immigrants illegally brought into the U.S. as children, in exchange for $5.7 billion of funding for the wall. The Senate voted on this proposal on Thursday, Jan. 24 along with a house-passed legislation backed by the democratic party intended to reopen the government without supplying any funding for the wall. Both of these bills failed to pass the Senate, which provoked President Trump’s agreement to reopen the government until Feb. 15.

On Jan. 25, Trump agreed to sign a continuing resolution, and the government shutdown came to an end after 35 days. His agreement proposed to reopen the government, however, it did not mention border security or funding for the wall.

Reflecting on his decision to end the shutdown, President Trump tweeted, “I wish people would read or listen to my words on the Border Wall. This was in no way a concession. It was taking care of millions of people who were getting badly hurt by the Shutdown with the understanding that in 21 days, if no deal is done, it’s off to the races!”